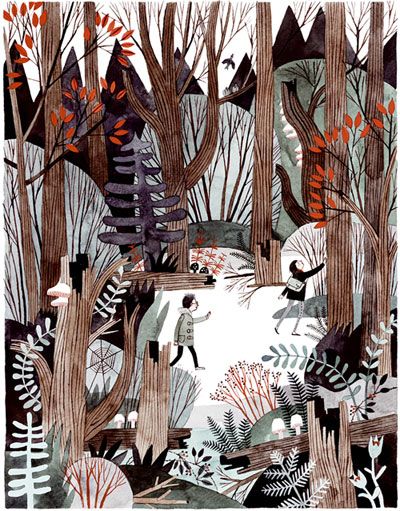 You see, Outsider child Curtis, there is a thing called Woods Magic that protects this wood from the curiosity of the outside world.  It is the thing that separates our kind from yours.  Every being in this forest has the Woods Magic running through their veins.  If one of your kind, an Outsider, was to find his way into these woods -- I think you charmingly refer to it as the "Impassable Wilderness" -- they would find themselves immediately and irretrievably caught in the Periphery Bind, a maze in which every turn is a dead end.  The forest becomes like a hall of mirrors, its image repeated in illusion into the horizon, you see, and at every turn one would find oneself exactly where one had started.  If you were lucky, the woods would spit you out somewhere back to the outside world, though it is just as likely that you would forever be lost, wandering the forest's infinite reflection until you either died or went mad.

Curtis slowly finished crunching the dandelion greens and swallowed them with a loud gulp.

"No, my sweet Curtis," the Governess said, thoughtfully toying with one of the eagle feathers pinned in her hair, "the only way you would have been able to cross the border and travel in these woods would be if you were born of the Magic yourself."

Curtis stared at the Governess, a chill running up his spine.

"Or," she continued, "if you you were accompanied by someone of Woods Magic."

The Dowager Governess looked directly into Curtis's eyes, the steel blue of her irises flashing in the light of the flickering fires, and smiled.