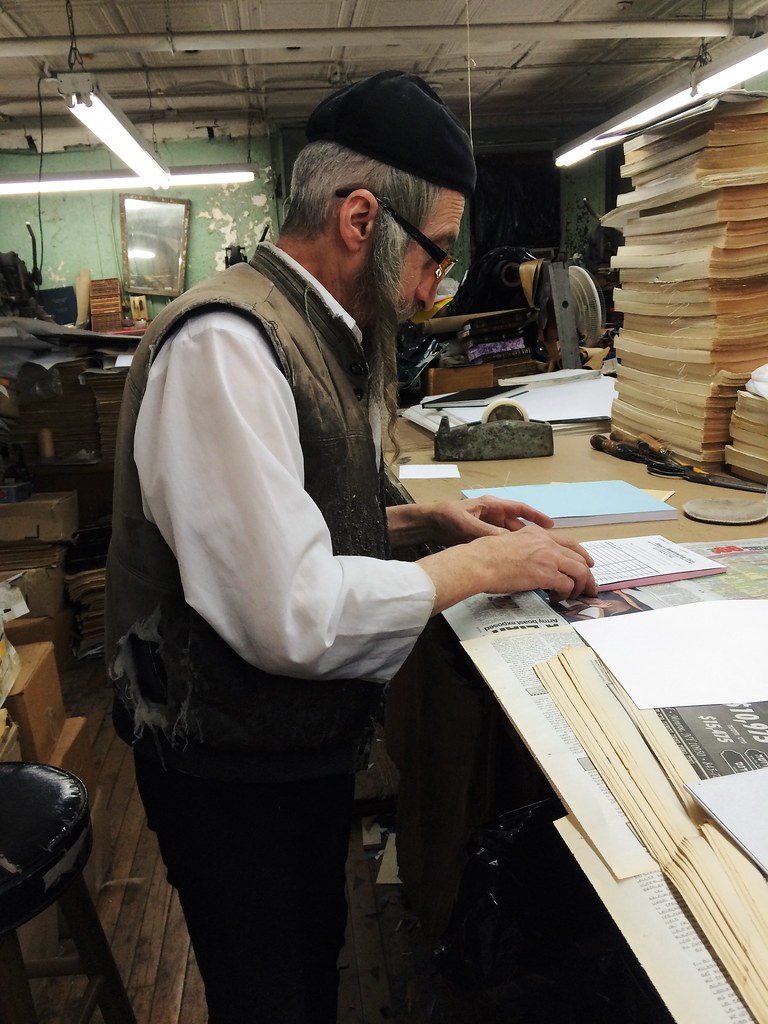 “I’m always in a good mood,” Henry tells me, with a jaunty, almost a rakish smile. His beard and sidelocks are gray, but there’s a nimbleness to his movements. His sleeves are rolled, and his shirt hangs open one or two buttons below what you might expect. Despite the long hours and the heavy lifting, he still enjoys the work. “Every morning I wake up and thank God.”

Henry’s workshop is five steps below street level, in the basement of the Congregation Sons of Moses synagogue. There are no windows and yet it’s a cheerful place, primarily because of Henry, but also because of the instruments he uses—the oversewing machine with its web of thread, the presses that are tightened by wheel crank, the hand guillotine and the foot guillotine. Some are wickedly efficient, others possessed of a Rube Goldberg charm. Grease is needed to keep these machines in working order, and there’s a sweetness in the air, from the lubricant oils, the leather polish and Elmer’s glue, all of it underlined by the nutty scent of paper recently cut.

Two rows of tables span the room. Their tops are covered in newspapers, discarded covers, fabric, brushes, pots of glue. A tinkerer’s chaos prevails, and as you pass through it, Henry watches and warns where you are most at risk of losing a finger, or of succumbing to schmutz.

135 Henry Street has been a bookbindery as long as anyone alive can remember. As a young man, Henry worked briefly as a sofer, transcribing the Torah and other holy writings by hand, then heard that his brother’s father-in-law, the bookbinder, needed help, and went to work in the shop. It was a bustling place. There were many others in the trade back then. One of Henry’s former colleagues, Moshe, was hanging around the day I went by to visit. Moshe is 86 now and a little stooped, but Henry assured me that in his day Moshe was the strongest of the bookbinders and did the work of ten men, or ten horses, even. Moshe nodded sagely. “I was strong,” he acknowledged. “Once I danced with six women in one night. September 17th, 1953.”

Thank You, Jessica.
Posted by Rob Firchau at 09:20