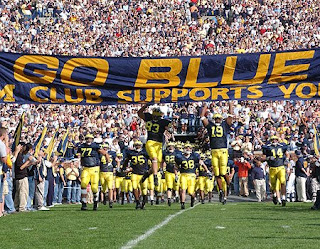 As a kid Up North, I became a huge fan of the Maize & Blue. I revelled in Saturday afternoon rituals, putting on a homemade Michigan jersey, listening to Bob Ufer call the game on "WJR: The 50,000 watt Voice of the Great Lakes," while my buddies and I took on the roles of Gordon Bell, Rob Lytle, and Rick Leach in our backyards.

I was privileged to be a fan at, what I consider to be, the finest era in the MICHIGAN-osu rivalry. Nothing has touched it since. Today, the rivalry is renewed as Michigan concludes their worst season ever, with 8 losses.

Many "loyal" fans are putting the blame for this season firmly on the shoulders of Michigan head coach, Rich Rodriguez. I prefer to remain staunch, remembering the words of, perhaps U of M's greatest coach, Field Yost, who said . . .

True loyalty is that quality of service that grows under adversity and expands in defeat. Any street urchin can shout applause in victory, but it takes character to stand fast in defeat. One is noise --- the other, loyalty.

Many self-absorbed Buckeye "fans" would do well to heed this advise from the sage, as well as Ufer's poem . . .

It was November 22nd, 1969
That they came to bury Michigan,
All wrapped in Maize and Blue
The words were said
The prayers were read
And everybody cried
But when they closed the coffin
There was someone else inside
Oh, they came to bury Michigan
But Michigan wasn’t dead
And when the game was over
It was some else instead
22 Michigan Wolverines put on their gloves of gray
And as Revelli played the Victors
They laid Woody Hayes away…
Posted by Rob Firchau at 11:28

Email ThisBlogThis!Share to TwitterShare to FacebookShare to Pinterest
Labels: sports, U of M